The Virginia Project lies in the southern region of Argentina known as Patagonia, in the province of Santa Cruz. Mineral exploration in Patagonia dates back only to the early 1980’s, with activity increasing in intensity since the early 1990’s. Mirasol started working on the Virginia properties in 2003. Once surface mapping and channel sampling revealed anomalous gold and silver mineralization on the property, Mirasol entered into an option/joint venture agreement with Hochschild Mining. Hochschild’s subsequent exploration efforts through 2008 focused on the “Santa Rita Main” mineralization and included outcrop sampling, geologic mapping, a ground induced polarization (IP) survey, and the drilling of seven diamond core holes. The results of these holes failed to substantiate earlier high-grade outcrop sampling, and Hochschild withdrew from the joint venture and returned the properties to Mirasol September 2008. Mirasol added to property base and re-initiated exploration of the project in February 2009.

The Virginia veins are low sulphidation epithermal precious metal veins, typical of those in the Desadeo Massif of Santa Cruz, though Virginia’s veins are high silver with respect to the other known properties in the Massif.

Drilling of the various veins that comprise the Virginia project occurred in four separate phases over the span of sixteen months (November 16, 2010 - March 30, 2012).

Drilling was successful in the definition of preliminary indicated and inferred resources in 2014. The resources were disclosed in the “Amended Technical Report, Virginia Project, Santa Cruz Province, Argentina - Initial Silver Mineral Resource Estimate” by Earnest, D.F. and Lechner, M.J. dated February 29, 2016 with an effective date of October 24, 2014. The Mineral Resource is contained in seven outcropping silver-bearing epithermal-type veins that demonstrate reasonable continuity along strike and at depth beneath the surface. These Mineral Resources were estimated using silver assay data from a total of 191 surface trench channel samples and samples from 223 diamond drill holes.

In May 2020, Mirasol and Silver Sands entered into a definitive agreement with Silver Sands Resources for the Virginia Silver project. Over the 2020/2021 field season, Silver Sands completed Phase I and II drilling programs at Virginia, which encompassed 38 drill holes for a total of 5,935m. The drill programs confirmed the potential to identify new well-mineralized structures that were not previously included in the NI 43-101 resource and the potential for new mineralization to be defined in the system at the Ely Central, Ely North, Martina NW and Julia South targets.

Phase II exploration program comprised of 20 drill holes for a total of 3,104 m. The Phase II program focused on following up on the results of Phase I and to test several new prospective zones. This program led to the discovery of a new high-grade zone at Ely Central, where drilling intersected strong and continuous Ag grades in four drill holes over a 200 m strike length. Drilling also intercepted high grade silver mineralization at the Ely North, Martina NW and Julia South targets. 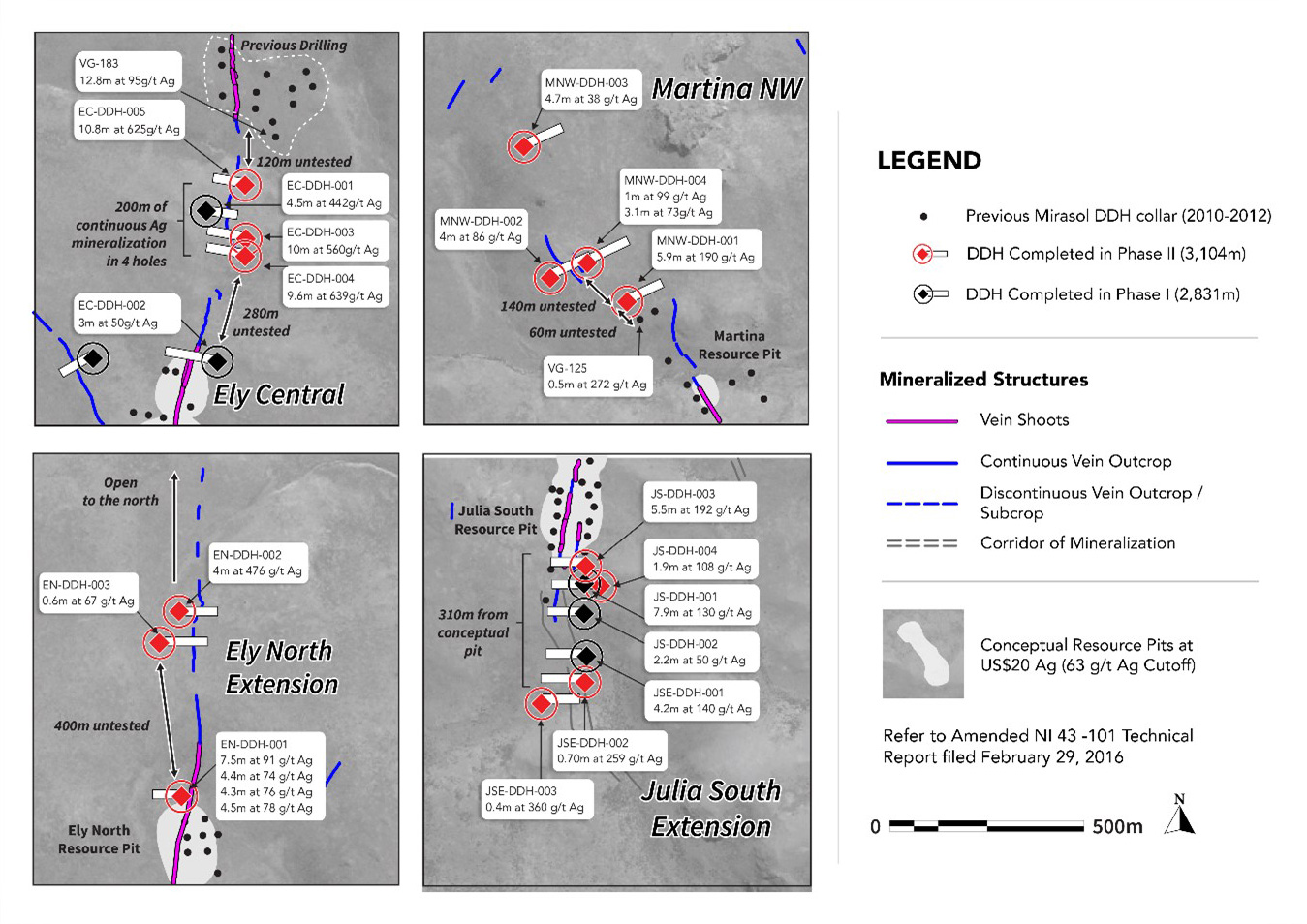 At Ely Central, drilling discovered a 200 m open ended strike length of strong silver mineralization that lies within a 580m “gap” left untested from the original drilling at Virginia by Mirasol in 2012. This new zone is currently defined by Phase II holes EC-DDH-003, EC-DDH-004, EC-DDH-005 and hole EC-DDH-001 completed in Phase I.

At Ely North, Hole EN-DDH-001 drilled 70 m north of the Ely North conceptual resource open pit intersected highly anomalous silver mineralization within a fault zone between 30-50m downhole. Continuing north from EN-DDH-001 through an untested “gap” of 400 m hole EN-DDH-003 encountered a low although anomalous value of 0.6m at 67 g/t Ag from a narrow structure which has been interpreted not to be part of main structure. The structure at Ely North, is characterized by fault zone hosted hydrothermal breccias with mineralized quartz vein fragments, very similar to those present at Ely Central. Both step-out and deeper drilling will be required in this area to test for the higher-grade epithermal vein structures.

At Martina NW, hole MNW-DDH-001 encountered an encouraging intersect of 5.90 m with 190 g/t Ag including 1.52m at 300 g/t Ag and 1m at 212 g/t Ag. This hole indicates that a strong potential for significant silver mineralization along the Martina trend exists further to the northwest along the same structure that hosts the Martina resource pit 300 m to the southeast. 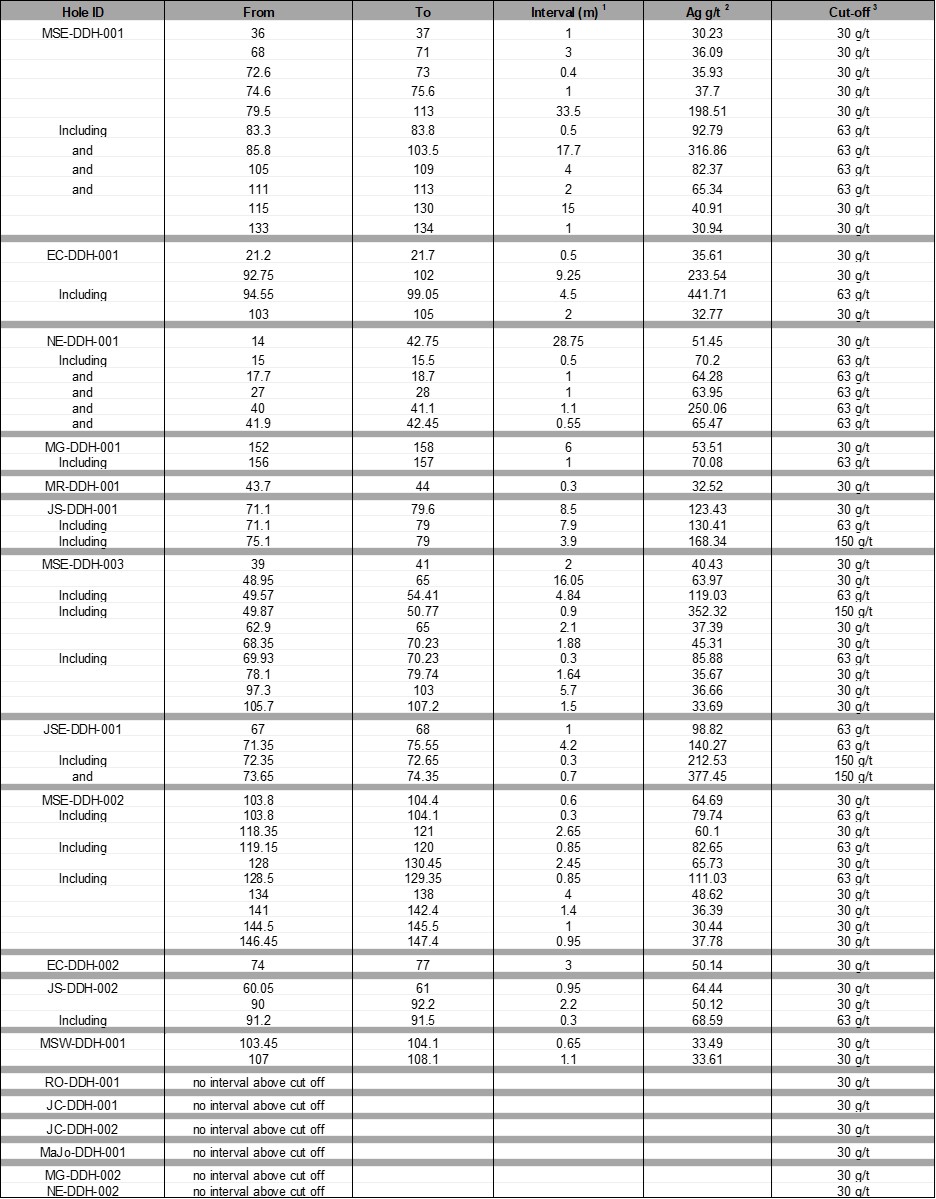 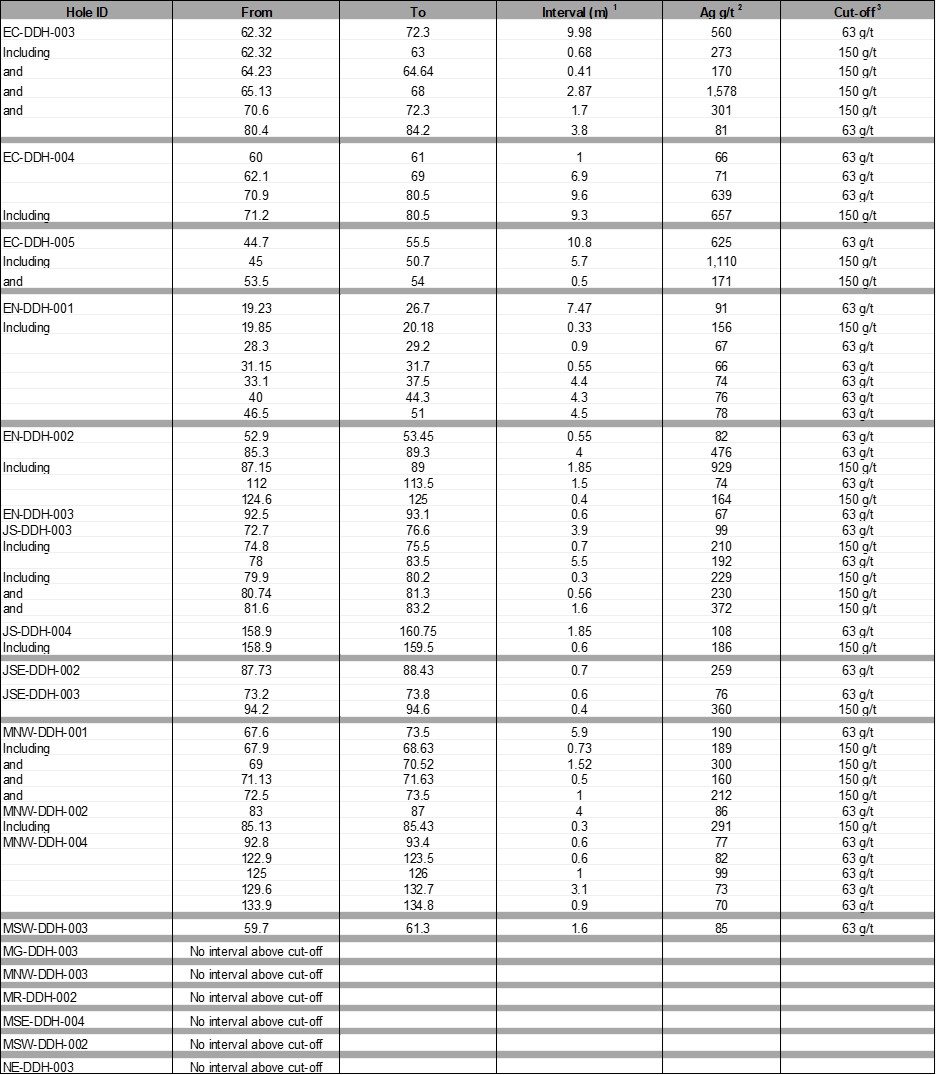 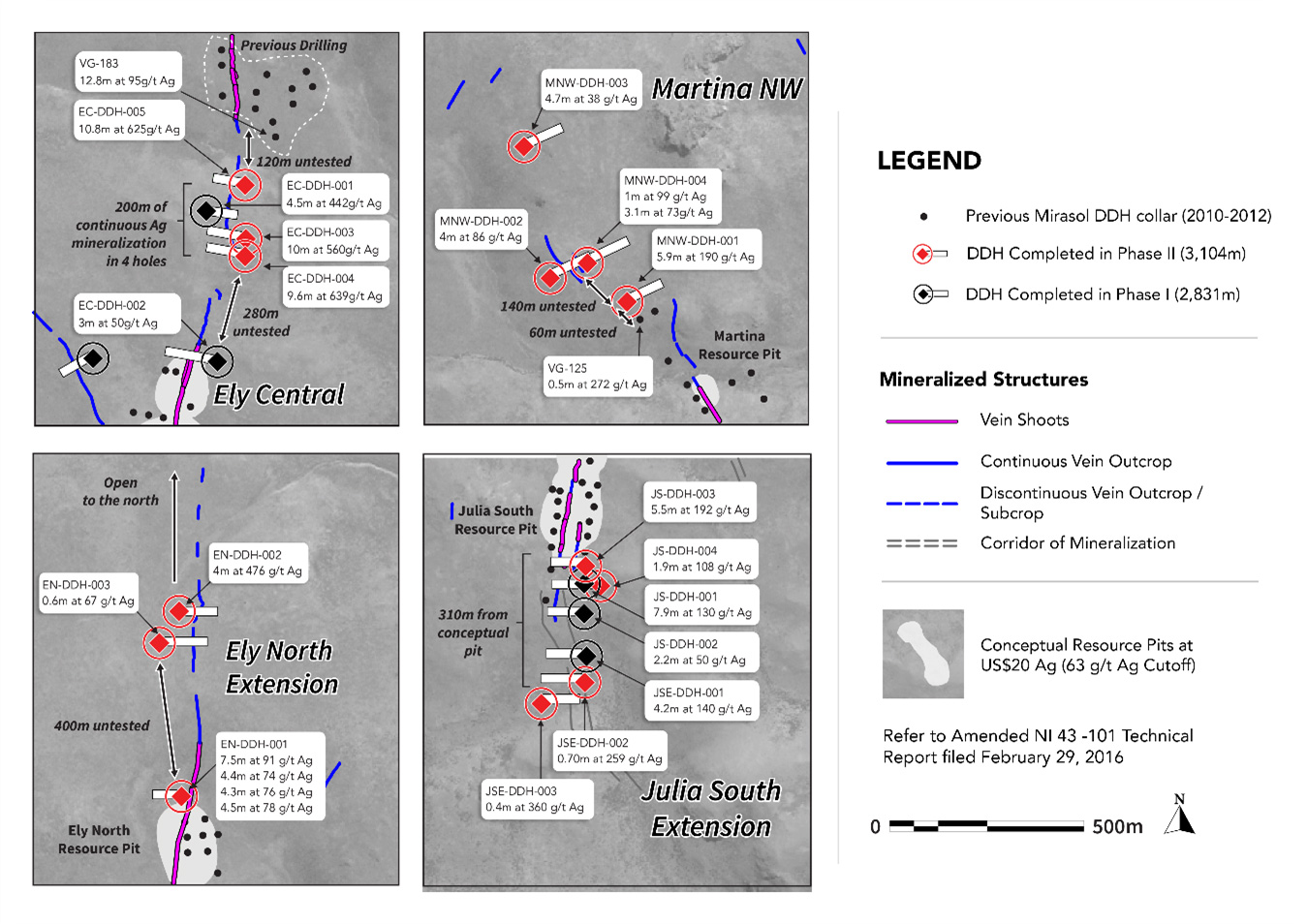 Planning is underway for an aggressive Phase III drill program scheduled to begin in late Q3’2021. Silver Sands is planning to drill extensively with the objective of expanding the mineralized footprint and potentially upgrading the resource at the Virginia project especially in the north-east where there are over 17visible chargeable anomalies with similar geophysical response as the existing veins with conceptual open pits on the property. 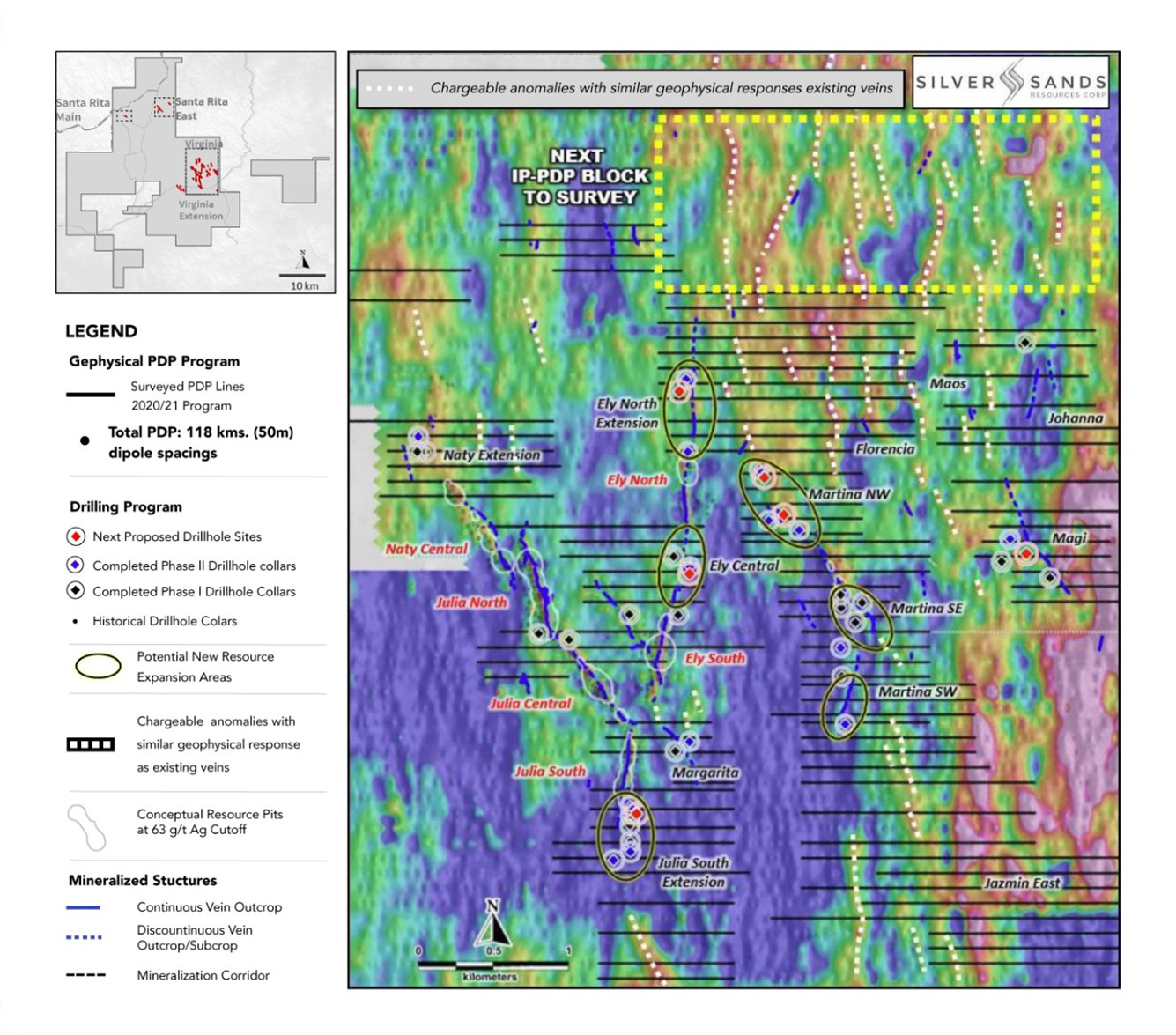