The road accessible Virginia Silver Project lies in Santa Cruz province, Argentina in the region known generally as Patagonia. The original 32,730 hectare property was increased to 59,747 hectares in 2016 as a result of discovery on new mineralization to the south of the known silver vein. Included in the property package are two large ranches (Estancias) totaling almost 36,000 hectares.

Virginia lies within the Deasado Massif, a large regional complex consisting mainly Jurassic volcanic and other older rocks surrounded by younger Cretaceous and Tertiary sedimentary rock which form basins and lap onto the older units. The Massif is dominated by middle Jurassic Rocks of the Bahia Laura Group, which are mainly volcanic in origin. The Bahia group is sub-divided into the Chon Aike Formation, mainly felsic volcanic rocks, and the Bajo Pobre Formation, mainly intermediate or mafic volcanic rocks. Both units appear to be of middle to upper Jurassic age and both are known to host important precious metal deposits believed to be upper Jurassic in age. Bahia Laura is overlain, and probably in part interbedded with, the Matilde Formation comprised of fine grained tuffaceous and sedimentary rocks of upper Jurassic age. These are the units which contain most of the known precious metals in the massif. 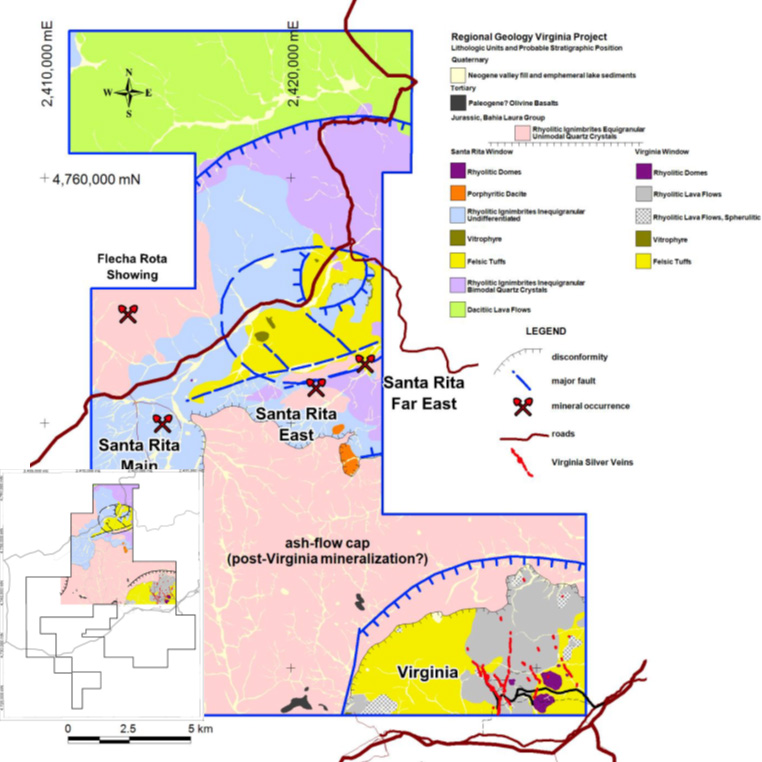 Initial Mirasol exploration in the early 2000’s focused on the Santa Rita zones in the north of the original claim block and resulted in an agreement with Hochschild Mining Corporation through 2008, during which time surface programs and drilling were completed. After Hochschild terminated the option, Mirasol focussed exploration to the south and located the Julia and other silver veins in the Virginia Window, an erosional window through the thin overlying post-mineralization tuffs. The silver veins are hosted by a Jurassic-age volcanic sequence consisting of local, generally felsic lava flows and pyroclastic tuffs and volcanic breccias overlain by a distinctly different post-mineral ash-flow ignimbrite. 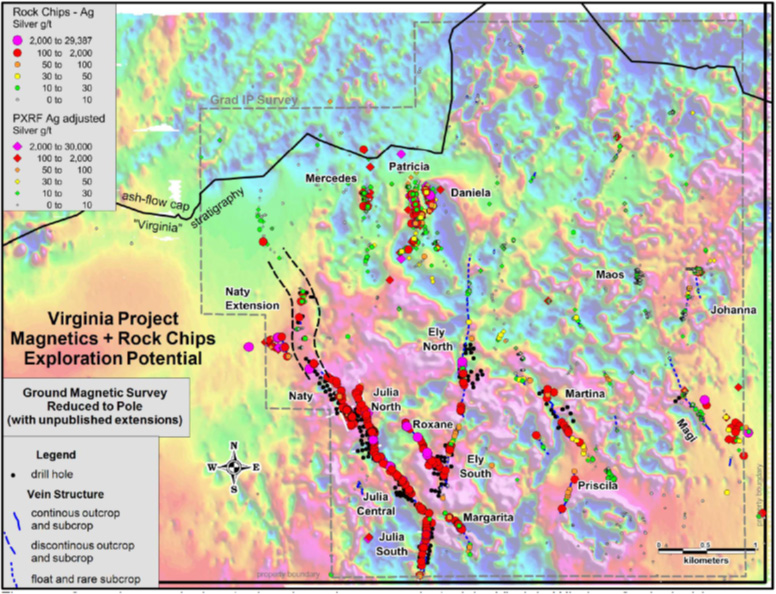 Four programs of diamond drilling between 2010 and 2012 totalled 23,318 metres in 227 holes (including holes which were redrilled to improve the core recovery). Seven distinct segments of four of the known veins were drilled, with highlight drill intersections shown in the following table: 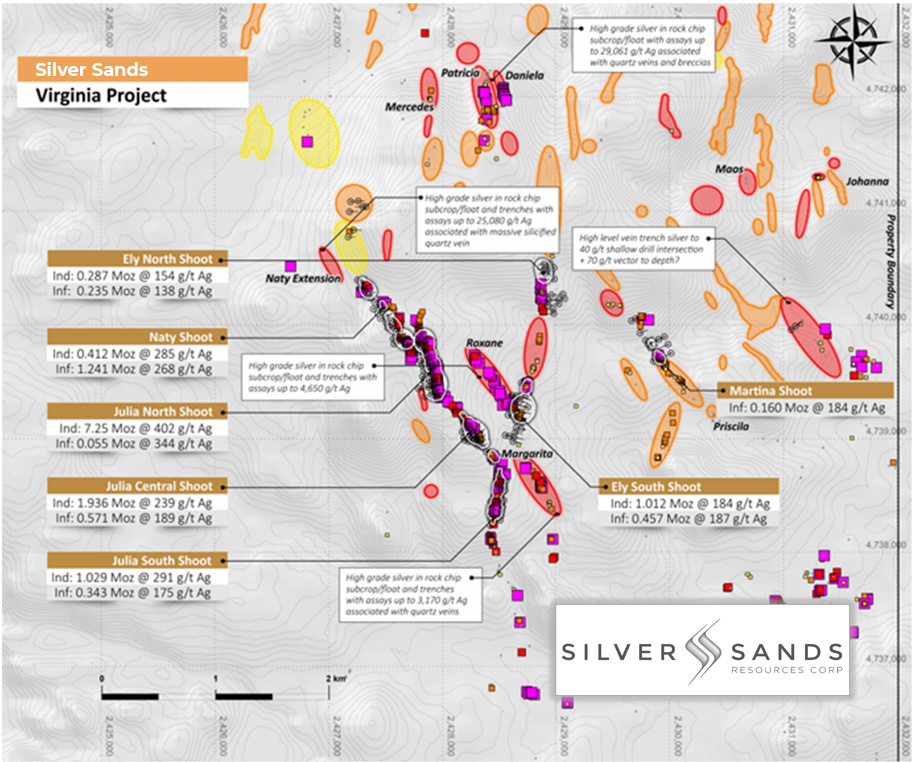 The drilling was successful in the definition of preliminary indicated and inferred resources in 2014. The resources was disclosed in “Amended Technical Report, Virginia Project, Santa Cruz Province, Argentina - Initial Silver Mineral Resource Estimate” by Earnest, D.F. and Lechner, M.J. dated February 29, 2016 with an effective date of October 24, 2014. The Mineral Resource is contained in seven outcropping silver-bearing epithermal-type veins that demonstrate reasonable continuity along strike and at depth beneath the surface. These Mineral Resources were estimated using silver assay data from a total of 191 surface trench channel samples and samples from 223 diamond drill holes. The Mineral Resources for each individual vein were based on rotated three-dimensional block models consisting of 2-meter by 2-meter by 2-meter blocks. Estimations of block grades were derived from 2-meter-long down-hole/along-trench assay composites constructed from individual high-grade outlier-capped raw silver assays, using a three-pass inverse distance cubed (1/d3) estimation method. Block tonnes were estimated based on density factors of 2.52 g/cm3 for vein/breccia material and 2.11 g/cm3 for halo/wallrock material. All of the mineral resources are contained within conceptual open pits that were generated using the following parameters: 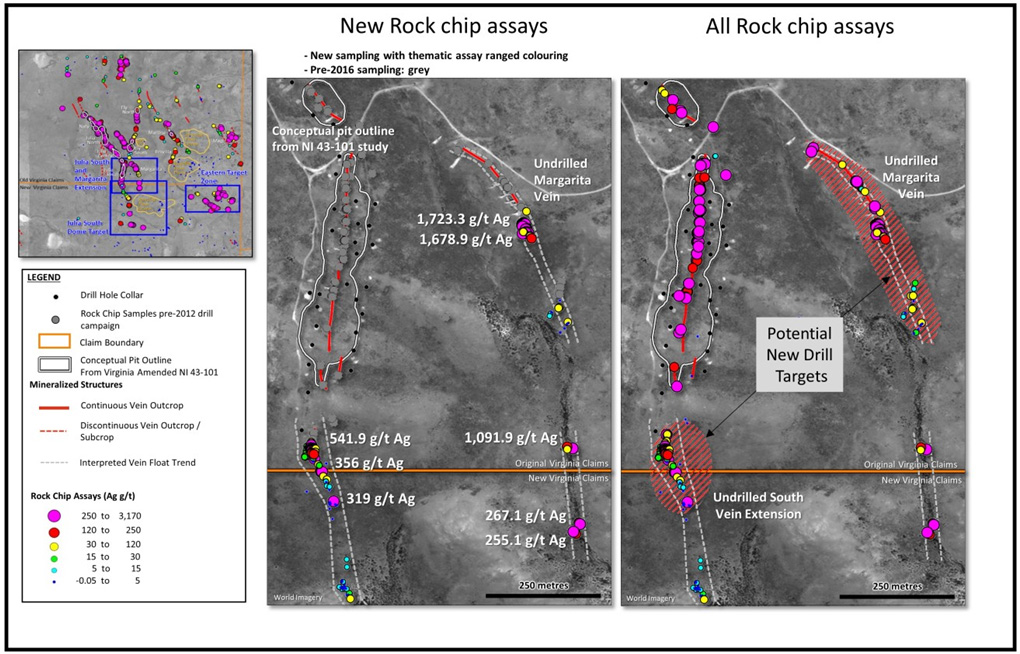 In 2016 through 2018, Mirasol extended exploration further to the south of the known veins and discovered new high-grade silver mineralization, including: 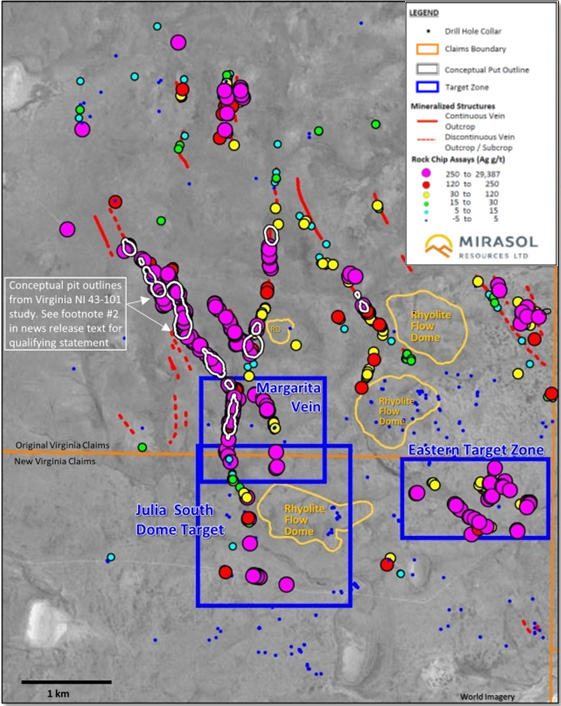 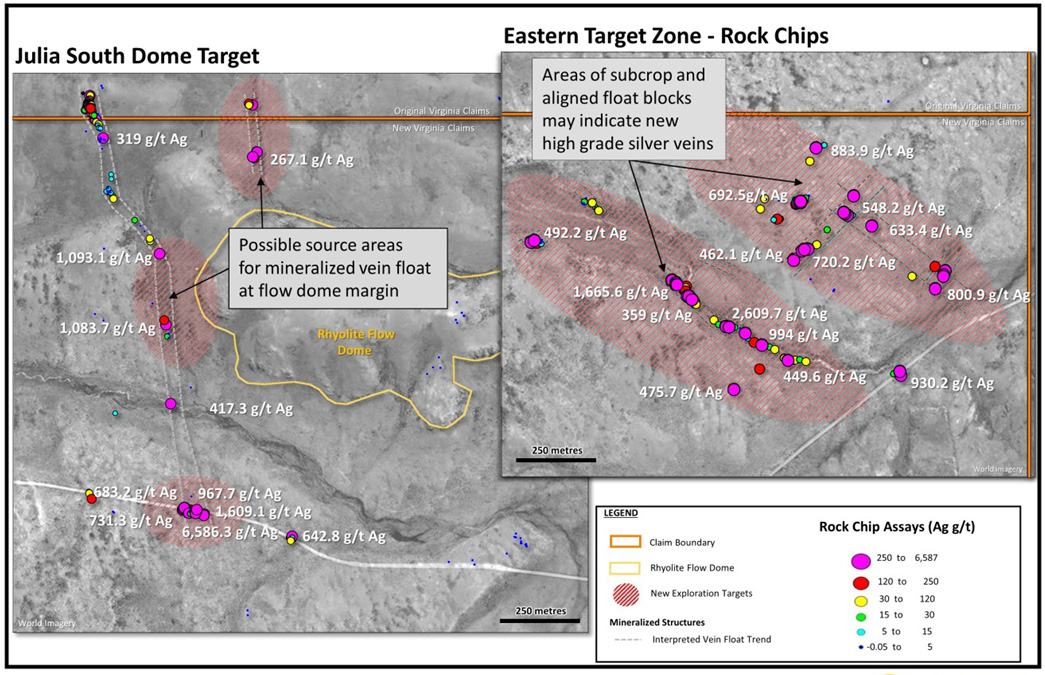 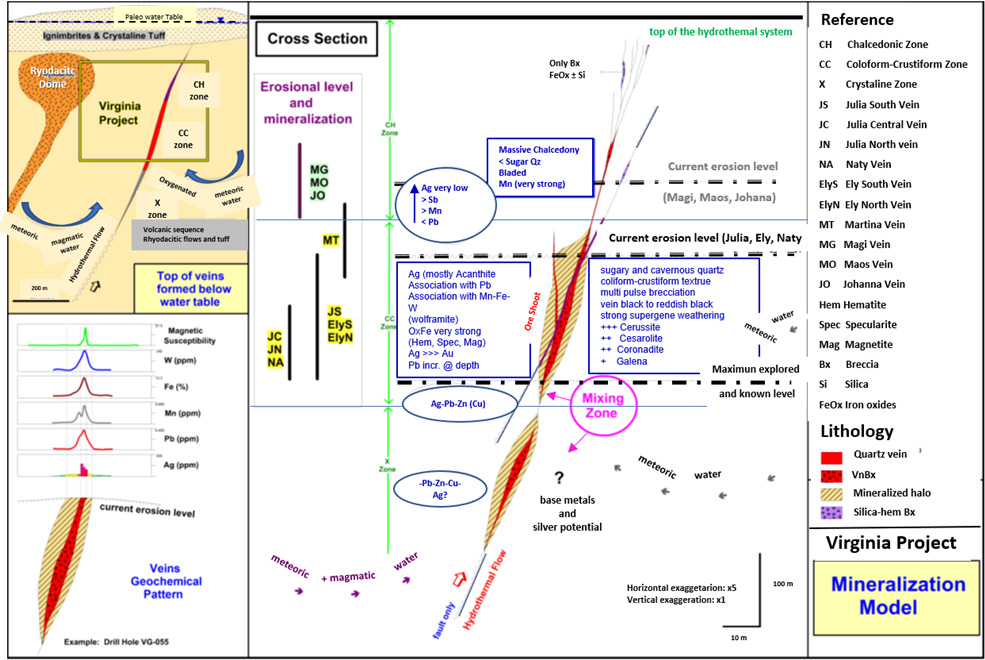 The Silver Sands Technical Team are commencing discussions with members of the Mirasol Technical Team to lay out the program for the upcoming exploration program.

Details to follow once the program is firmed up.