“We continue to be delighted with the steady progress we have made over the last two years as we work to build on the Virginia resource base,” commented Silver Sand CEO Keith Anderson. “Our four drilling campaigns are indicating the Ely Vein may very well be one continuously mineralized 870 metre structure, suggesting a significant addition to the current resource base,” he continued. ”We are also seeing significant new silver mineralization at Margarita vein, indicating potential for new veins remains high at the main Virginia silver-rich vein field. More importantly, initial drilling of outlying “blue sky” veins, such as the Patricia Trend, are starting to deliver indications of stronger silver mineralization,” he concluded. 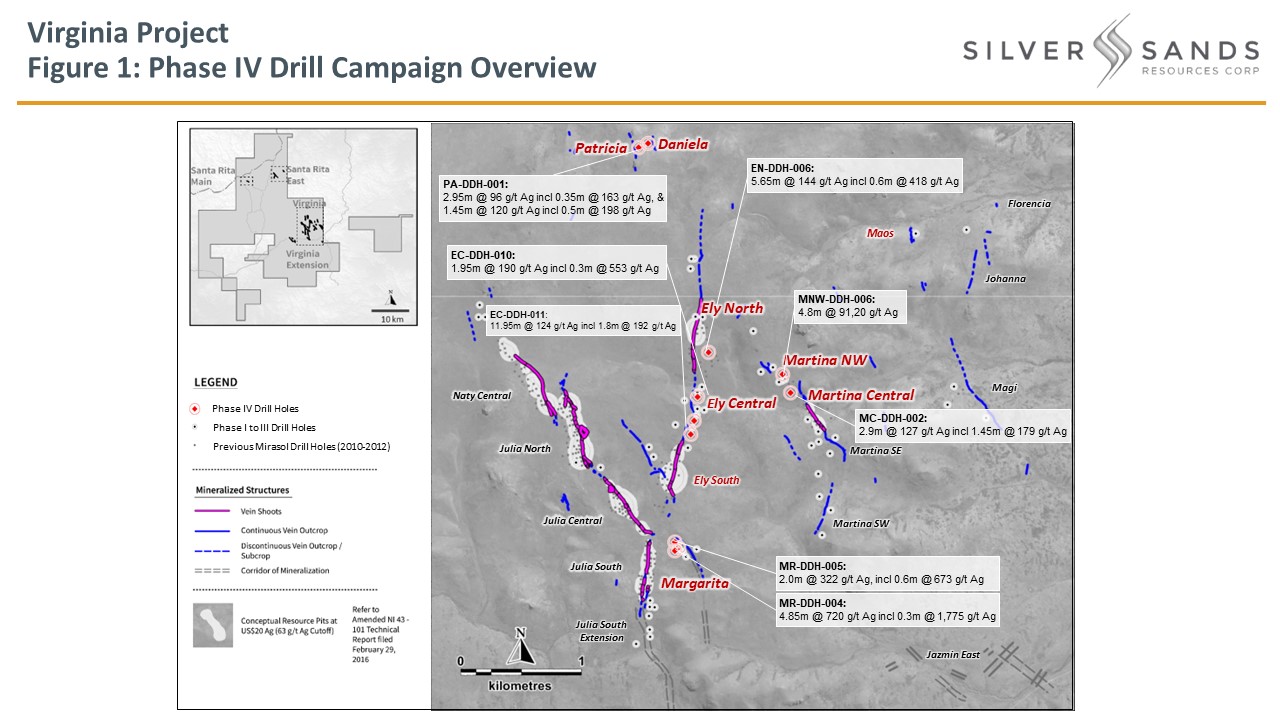 The Phase IV focus centered on successfully testing the gaps along the principal vein structures at Ely and Martina, and extending Margarita to define new silver mineralization, and potentially new resources at Virginia.

Previously undrilled “blue sky” targets of Daniela and Patricia were also tested during this campaign, with an encouraging intercept at Patricia, representing the first real significant silver drill intersections from these “outlying” vein trends to north and east of the principal resource pits.

Drilling to the south and north of the pit resource at Ely North and Ely Central, resulted in significant intersections which potentially add new resources to the current Ely North resource area. The drilling suggests a continuously mineralized vein structure in the order of 872 metres. 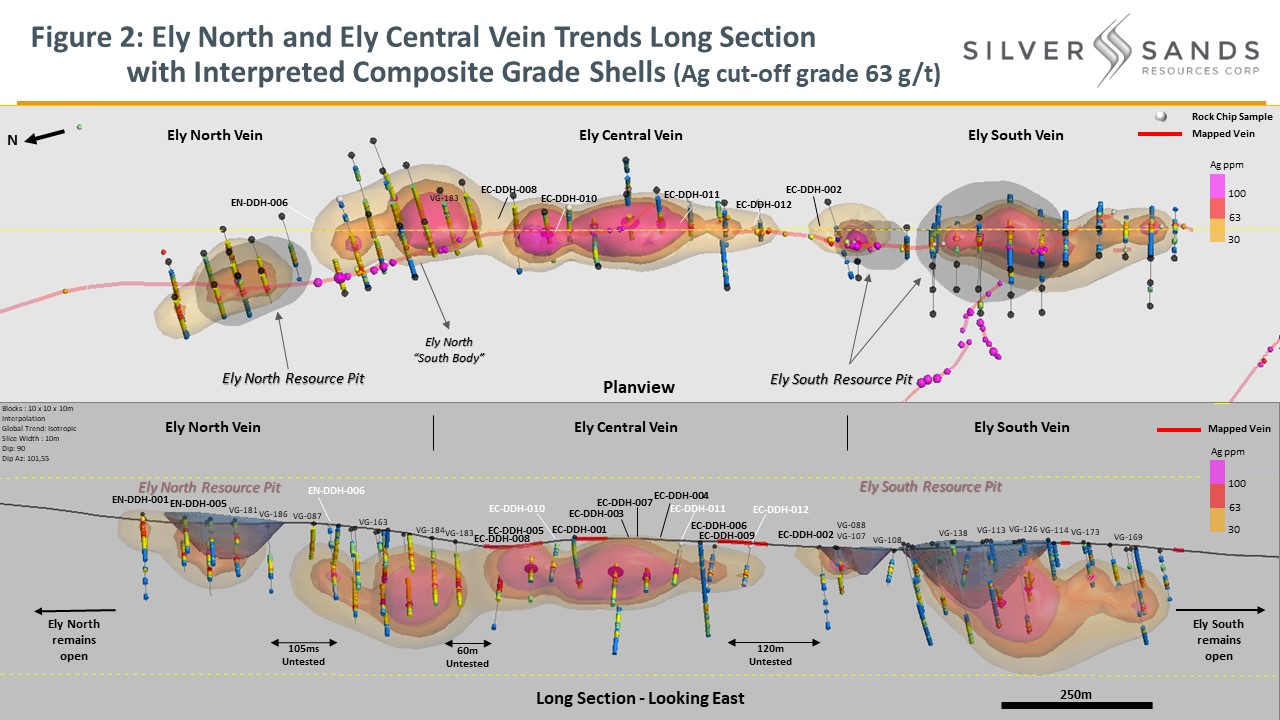 Principal drill results of the campaign:

One drillhole successfully tested the northern extension of the 200m long anomalous southern end of Ely North vein, currently lying outside of the Ely North Resource pit, at a vertical depth of 100m below the surface. The hole extended the zone a further 50 metres to the north and further reduced the gap with the North resource pit. 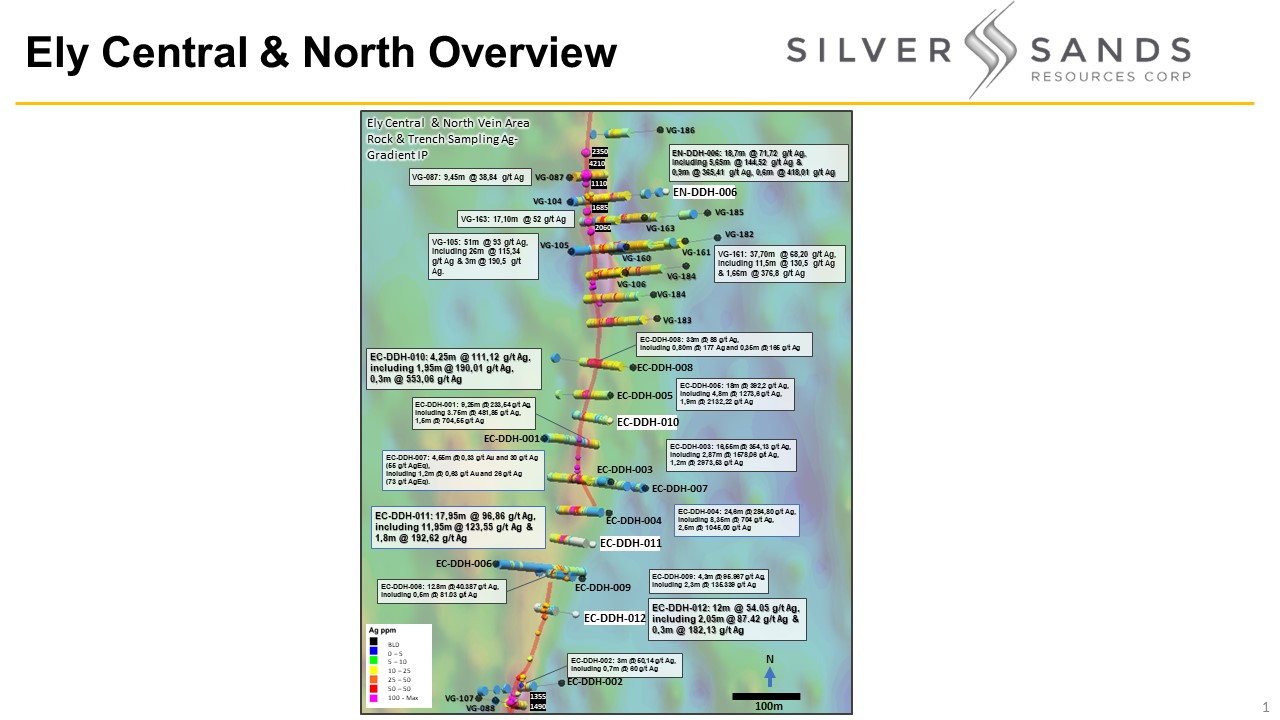 The Ely Vein Longitudinal Section (Figure 2) clearly shows areas of prospective “gaps” requiring infill drilling to connect the current Ely South and Ely North resource pits: including the existing gaps between EC-DDH-012 and EC-DDH-002, between EC-DDH-008 and VG-183 and between EN-DDH-006 and VG-186. The northern-most end of the Ely North resource pit was also extended by EN-DDH-001 and remains open to North.

Three drillholes totaling 333 metres were successfully completed at the new emerging Margarita high grade silver vein zone, extending the mineralized trend in excess of 150m to the north-west; the system remains open in both directions and at depth. The silver mineralization and assay results at Margarita Vein are extremely encouraging as they bear a strong resemblance to the mineralization and grades at the Julia Vein, host of a significant portion of the silver resources at Virginia. Highlights include: 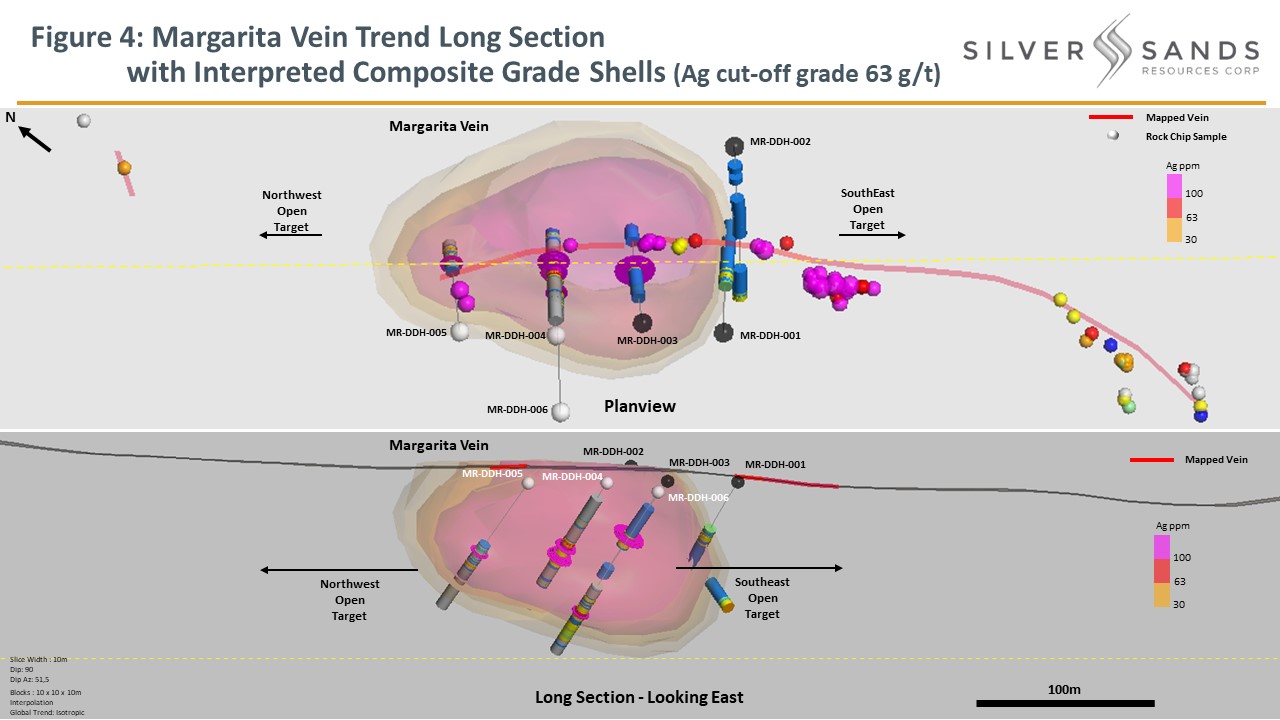 Two holes were drilled at the Martina vein trend in Phase IV. 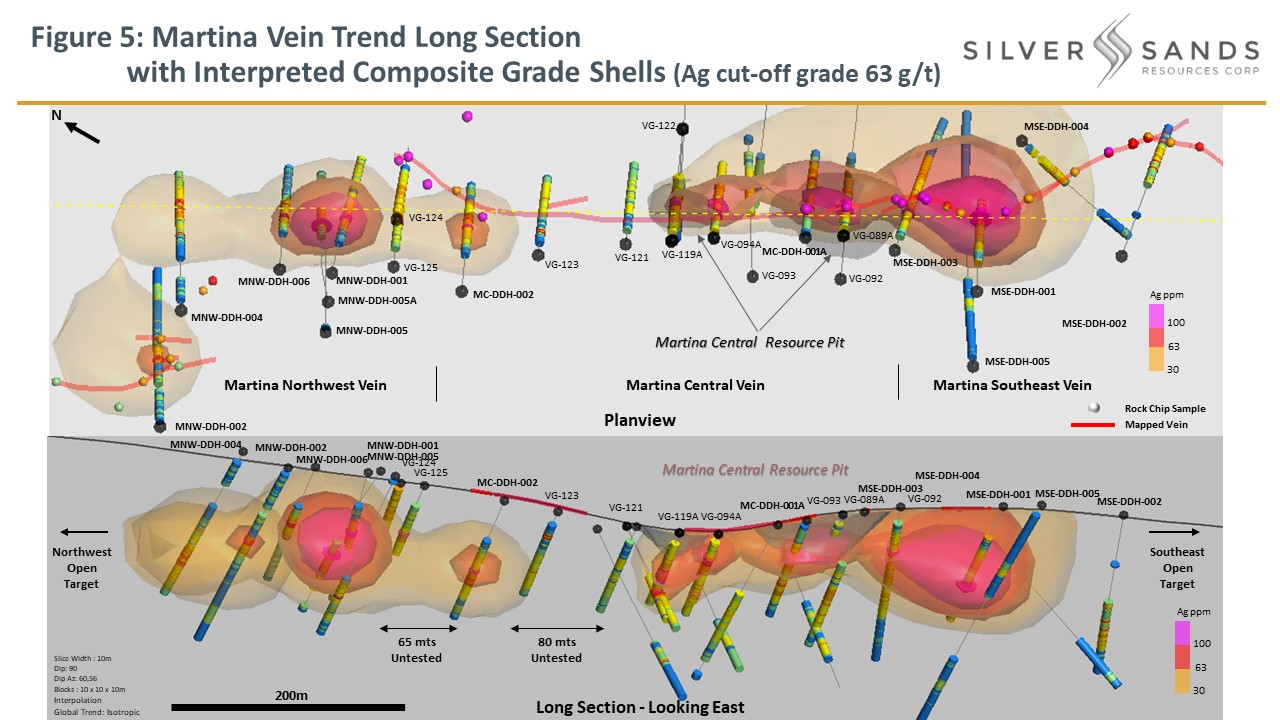 The Patricia and Daniela veins are important as they lie well outside of the main Virginia vein field hosting the current mineral resource area and hence, represent new areas for potential silver mineralization.  Further, they host the highest untested surface silver rock chips anomalies. One drill hole tested each of these targets in Phase IV, with the objective of confirming the downdip extensions of these surface expressions, as these were the initial drillholes into each of these targets. The Patricia drill hole, PA-DDH-001 encountered 120 g/t silver over 1.45m, including 198.5 g/t silver over 0.5m, along with a second zone of 97.5 g/t silver over 2.95m, including 163 g/t silver over 0.35m. While these drill results have not yet replicated the extremely high grade blocks (29,837 g/t silver) sampled on the surface at Daniela and Patricia, they have shown both the structure and significant silver mineralization occur at depth (see October 29, 2020 news release).

_Reported intervals may include up to a maximum of 2m individual section below cut-off grade and Ag grades are uncapped.

3 The intervals were selected using the 63 g/t Ag cut-off grade used in the NI 43-101 resource estimate.

Hole SRE-DDH-005 was completed at the Santa Rita East breccia structure prospect, with the objective of testing continuity of the epithermal quartz- adularia vein intercepted at SRE-DDH-003. (5.20m at 0.63 g/t Au and 7 g/t Ag from 35.30m) further to depth.  SRE-DDH-005 intersected 0.2 g/t gold over 1.3m and 0.18 g/t gold over 0.45m. The +200 metre long IP high chargeability anomaly remains largely unexplained and further drilling is required to fully evaluate it.

Virginia is a low to intermediate sulphidation epithermal silver deposit located in the mineral-rich Deseado massif, lying within the mining-friendly province of Santa Cruz in the Patagonia region of Argentina. Through initial discovery in 2009 to four drill programs between 2010 and 2012, Mirasol Resources was able to define an initial indicated mineral resource of 11.9 million ounces of silver at 310 g/t Silver and a further inferred 3.1 million ounces of silver at 207 g/t Silver within seven outcropping bodies. This resource is documented in a Mirasol Resources technical report entitled: "Amended Technical Report, Virginia Project, Santa Cruz Province, Argentina -- Initial Silver Mineral Resource Estimate" with an effective date of Oct. 24, 2014, and a report date of Feb. 29, 2016.

On Behalf of the Board of Directors

QAQC: Silver Sands applies industry standard exploration sampling methodologies and techniques. All geochemical rock and drill samples are collected under the supervision of the company’s geologists in accordance with industry practice. Geochemical assays are obtained and reported under a quality assurance and quality control (QA/QC) program with insertions of controls (standards, blanks and duplicates, representing 5%, 4% and 5% of the samples respectively). Standards and blanks are inserted randomly in all drill core batches that are submitted to the laboratory, while duplicates are done on both the coarse reject (2.5%) and pulps (2.5%). Drill core samples have a minimum of 0.30m and a maximum of 2.00m in length. Samples are dispatched for analysis to Alex Stewart International Labs in Argentina, an ISO 9001:2015 accredited laboratory, which is independent from the Company. The samples are delivered to the laboratory by Mirasol personnel, a dedicated private courier, or by the dedicated laboratory pick-up service. Core diameter is generally HQ/HQ3 and samples are analysed by Fire Assay for both Au and Ag and also by ICP MS including a package of 48 elements.

Back to Past News