VANCOUVER, BC, February 10, 2022 — Silver Sands Resources Corp. (“Silver Sands” or the “Company”) (CSE: SAND) (OTCQB: SSRSF) is pleased to release the results from the Santa Rita gold-silver portion of its 2021 Phase III drill program at the Virginia Project in Santa Cruz Province, Argentina.

The program confirmed the anticipated down dip extensions and increase in gold-silver values of the surface veins outcroppings, setting the stage for deeper drilling into the suspected zone of mineralization, typically found in the Low Sulphidation Epithermal (”LSE”) vein deposits of the Argentinian Deseado Massif. Highlights include:

"The new drill results confirm the potential of Santa Rita as a second target area for silver and gold at Virginia, complimenting the Virginia Silver Vein Field,” commented Silver Sands CEO Keith Anderson. “We confirmed the veins show both increasing gold and silver values and continuity with depth; the next Phase at Santa Rita will be following the veins down dip to the “boiling horizon” or zone of gold-silver mineralization.”

“Combined with the discovery of high-grade silver mineralization at Margarita and the extensions of the Ely Vein mineralized shoots, management is ecstatic with the results of the Phase III Virginia drilling program. The upcoming Phase IV drill program will continue its focus on increasing the resource base at the Virginia Silver Vein Field, as well as following up the Phase III successes at Santa Rita" he concluded. 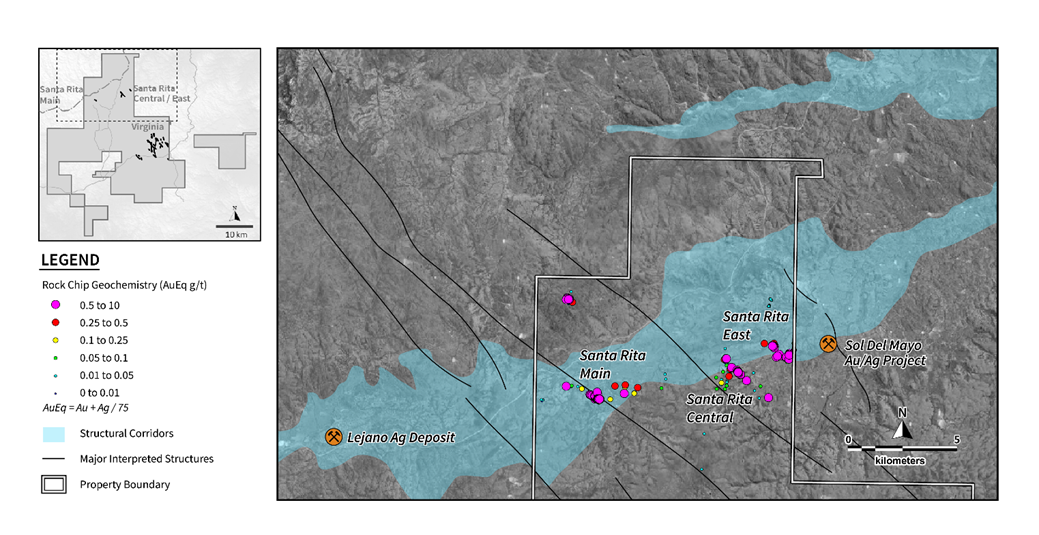 Drilling at Santa Rita was focused on a series of gold-silver epithermal veins, located approximately 15 kilometres north of the Virginia Silver Vein Field, and represents the virgin drill program at the Santa Rita Central and Santa Rita East targets.

The Phase III drilling program comprised 20 core holes (2,932m) with 14 holes for 2,437m at Virginia and 6 holes for 495m at Santa Rita, located in the north of the property package. Results reported today are for 6 holes from Santa Rita, 4 in Santa Rita East and two in Santa Rita Central.

The Santa Rita prospects (Main, Central and East) are located at the intersection of a 3 km wide northwest orientated regional structural corridor and east-northeast basin controlling structural zone which also hosts the advanced Lejano Silver  project 18 km to the west of Santa Rita Main, and the prospective Sol del Mayo Gold-Silver  project 1.5 km to the east of Santa Rita East. These east-northeast structural zones are understood to be an important province-wide control on economic mineralisation, as exemplified by the structural settings for the Cerro Negro and Cerro Vanguardia mines. 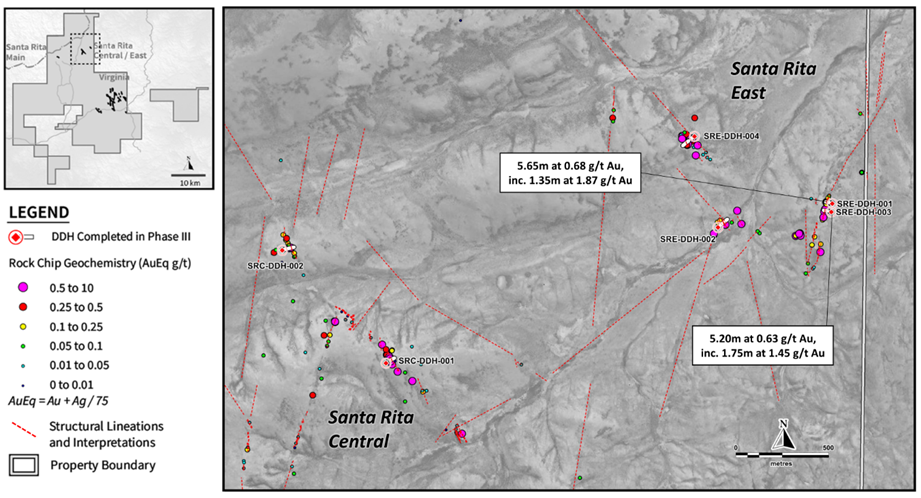 The 2021 drilling focused on the Santa Rita Central and East zones, located 6.5 to 8.5 km to the east of the Santa Rita Main zone previously explored by Mirasol between 2004 to 2008. Santa Rita Main is an open ended 3,500m long by 500m wide northwest orientated trend containing mapped veins with silver epithermal mineralisation generally less than 10m wide. Noteworthy assay results from drill holes completed at that time returned weighted average intersections of 0.6 to 3.4m with silver values ranging from 21 to 156 g/t. Based on the drill hole and surface exploration data, Santa Rita Main was interpreted to potentially represent the upper levels of a silver-gold epithermal system, with the potential to also host base metal mineralization.

The principal objective of the Santa Rita East and Central 2021 drill program was to test the surface exposures highlighted by 2021 trenching and geophysics to depths of 20 to 30 m to confirm structural orientation data to facilitate subsequent deeper drilling into the “boiling horizon” of suspected zone of precious metal mineralization.

At Santa Rita East, four drill holes were completed for a total of 329m. Hole SRE-DDH-001 intercepted a robust 5m wide zone (from 34.95 to 39.95m) of polymictic hydrothermal breccia hosting a 0.40m wide colloform banded quartz adularia vein. This hole returned 5.65m at 0.68 g/t gold from 35.65m, including 1.35m at 1.87 g/t gold. Hole SRE-DDH-003 was targeted 50m further south along the same structure trend and intercepted 5.20m at 0.63 g/t gold and 7 g/t silver from 35.30m This interval included a 3m wide hydrothermal breccia hosting a quartz adularia colloform epithermal vein in the center with a width of 0.6m. Observed epithermal textures represent multi-pulse hydrothermal events within this structure, which are considered essential for the formation of productive epithermal mineralization. Equally importantly, gold and silver values in drill core are slightly stronger than on surface, and are expected to increase at depth. The structures at depth also significantly increase in width (+5m) compared to the narrow centimeter-scale expressions on surface.

At Santa Rita Central, two holes were completed along the northwest trending structure for a total of 166m. Hole SRC-DDH-001 was targeted to test the central part of the structure with gold and silver rock chip samples with up to 1.76 g/t and 321 g/t respectively. It intercepted isolated quartz veinlets and zones of sheeted veinlets, displaying bladed textures and local evidence of incipient banding, also considered typical of the upper levels of these epithermal systems, and potentially transitioning into the deeper more productive part of the system. This hole intersected 1.80m at 0.25 g/t gold and 28 g/t silver (0.62 g/t AuEq), which are considered encouraging within this level of the system.

Overall, the drilling campaign at Santa Rita accomplished its objective, confirming the existence of, and tracing the vein outcrop and aligned float surface expressions to depth in the drill holes. Drilling to date has been very shallow with the deepest hole only reaching 32m vertically below surface.  Deeper drilling is required along strike and to depth to confirm the potential of these targets. The surface and drill results confirm that Santa Rita, particularly Santa Rita Central and East, represent a more “typical” quartz-adularia LSE mineralization that is distinct from Virginia main with both significant gold and silver values. The Company is very encouraged with the surface and drill core gold values encountered to date at Santa Rita Central and East, believing they clearly warrant further follow up drilling.

Virginia is a low to intermediate sulphidation epithermal silver deposit located in the mineral-rich Deseado Massif, lying within the mining-friendly province of Santa Cruz in the Patagonia region of Argentina. Through initial discovery in 2009 to four drill programs between 2010 and 2012, Mirasol Resources was able to define an initial indicated mineral resource of 11.9 million ounces of silver at 310 g/t Silver and a further inferred 3.1 million ounces of silver at 207 g/t Silver within seven outcropping bodies. This resource is documented in a Mirasol Resources technical report entitled: "Amended Technical Report, Virginia Project, Santa Cruz Province, Argentina -- Initial Silver Mineral Resource Estimate" with an effective date of Oct. 24, 2014, and a report date of Feb. 29, 2016.