VANCOUVER, BC, February 02, 2021 —Silver Sands Resources Corp. (CSE: SAND) (OTCQB: SSRSF) is pleased to announce the 2,700m Phase II drill program at the Virginia Silver Project, located in Santa Cruz province, Argentina has commenced. This program will follow up and build on the successful 2,831m Phase I drill program completed in November.

A key aspect of Phase II drilling is to continue the expansion of the 2016 mineral resource by drilling gaps and extensions of the principal veins comprising the resource.  The 2016 resource contains 11.9 million indicated ounces of silver at 310 g/t and 3.1 million inferred ounces of silver at 207 g/t within seven  conceptual open pits.  Previous drilling intercepted mineralization at depths from surface to 150 metres.

Phase I drilling expanded the lateral extent of mineralization of two of those structures, the Ely Central and Martina SW with significant intercepts that included:

Reported interval lengths are down hole widths and not true widths

“We were very pleased to encounter significant intersections in 2 of our first 6 holes as we looked at increasing the lateral extent of mineralization at both Ely Central and Martina SW. The Phase II program is further targeting both of these zones, along with some of the other principal veins and new targets generated from the Phase I trenching and IP programs,” commented Silver Sands’ CEO, Keith Anderson.

“We are fully funded to carry out this program and also to significantly expand this program based on favourable results,” he continued. “Speaking of results, we expect to release the results from the remaining 12 holes from Phase I in the near future once the final geochemical results have been received and QA/QC has been fully completed and approved.” he concluded.

The Phase II drilling program will continue testing gaps and extensions of the principal veins at the Martina NW and SW, Magi, Julia South Extension, Naty Extension and Ely Central targets. In addition, holes will follow-up and drill down dip and adjacent to some of the better intersections returned during the Phase I program at both Martina and Ely. The aim of 2021 exploration remains extending known mineralization and testing new targets to increase the 2016 Virginia Resource with an updated resource estimate targeted for late H2 2021. 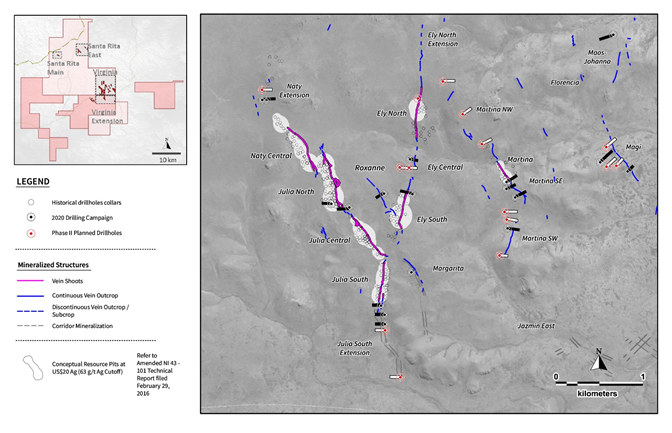 Previous exploration undertaken on the property in the northern section of the property, 15 kilometres northwest of the Virginia Silver Project defined an open ended, northwest oriented, 3,500m long by 500m wide trend of epithermal Ag mineralization in breccias veins from centimetres to 10m wide and an associated sheeted quartz vein stockwork (see Mirasol  October 7, 2005 News Release).  Three holes from this Phase will be directed at the Santa Rita target to test a recent re-interpretation of previous exploration and drilling data suggests drilling was targeted too high up in the system and targeted too far in the footwall of the trend to reach the favourable hanging wall side of the trend.

The technical content of this news release has been reviewed and approved by R. Tim Henneberry, P.Geo. (BC) a Qualified Person under NI 43-101 and a Director of Silver Sands.

The Company is pleased to confirm that the Company’s common shares have been approved for eligibility by the Depository Trust Company (DTC) thus allowing for cost effective electronic settlement and clearing of its common shares in the United States under its OTCQB symbol, SSRSF.

DTC, the world’s largest post-trade financial services company is a subsidiary of the Depository Trust & Clearing Corporation (DTCC), a U.S. company that manages the electronic clearing and settlement of publicly traded companies.  Securities that are eligible to be electronically cleared and settled through DTC are considered to be “DTC eligible.

Silver Sands’ CEO, Keith Anderson, commented: "Obtaining DTC eligibility is an important milestone for the Company.  DTC eligibility ensures a seamless process of trading and settlement in order to enhance liquidity of the Company's common shares in the United States.  With Silver Sand’s shares now traded electronically, existing shareholders benefit from greater liquidity over time and execution speeds, while new investors are far less restricted from participating in the Company’s stock."

The Company has decided not to proceed with its Detour Lake Property option agreement and has advised the Optionor of the termination.

The Canadian Securities Exchange has not approved nor disapproved the contents of this news release.