Vancouver, British Columbia, February 27th, 2020: Golden Opportunity Resources Corp. (the “Company” or “Golden Opportunity”) (CSE: GOOP) is pleased to announce that it has signed a non-binding letter of intent (the “LOI”) with Mirasol Resources Ltd. (“Mirasol”) to acquire a 100% interest (the “Option”) in Mirasol’s 73,411 hectare Virginia silver project located in the Santa Cruz Province of Argentina (the “Project”).In addition, Golden Opportunity is pleased to announce a non-brokered private placement for aggregate gross proceeds of up to C$2,000,000 (the “Private Placement”) through the issuance of up to 20,000,000 units of the Company (each a “Unit”) at a price of C$0.10 per Unit with a half of a Warrant at a price of C$0.25 for two years.

Golden Opportunity’s CEO Keith Anderson comments, “This is an exciting time in our Company’s infancy stage since recently being publicly listed. This Letter of Intent with Mirasol is a step towards building an exciting new mining company with a focus on developing precious metal assets in mining friendly jurisdictions. Once this transaction is completed, Mirasol will be a significant shareholder and a strategic partner as we move forward in creating value for all of our shareholders. Mirasol will also continue to be the Operator of the Project, which will come with in-country technical and geopolitical experience of operating in the district.”

“The Virginia Project is located in a well-known, safe and established mining district with neighbouring resources and mines run by some of the largest silver and gold mining companies. Though the mineralization hosted on adjacent and/or nearby projects is not necessarily indicative of the mineralization hosted on the Virginia project, the district includes major mining companies such as McEwen Mining, Hochschild, Pan American Silver, Yamana Gold and Sandstorm Gold. Mirasol has already done a great amount of ground and drilling exploration work to identify, expand and create targets within and outside of the known mineralization. Our team is looking forward to working together on developing this Project.” 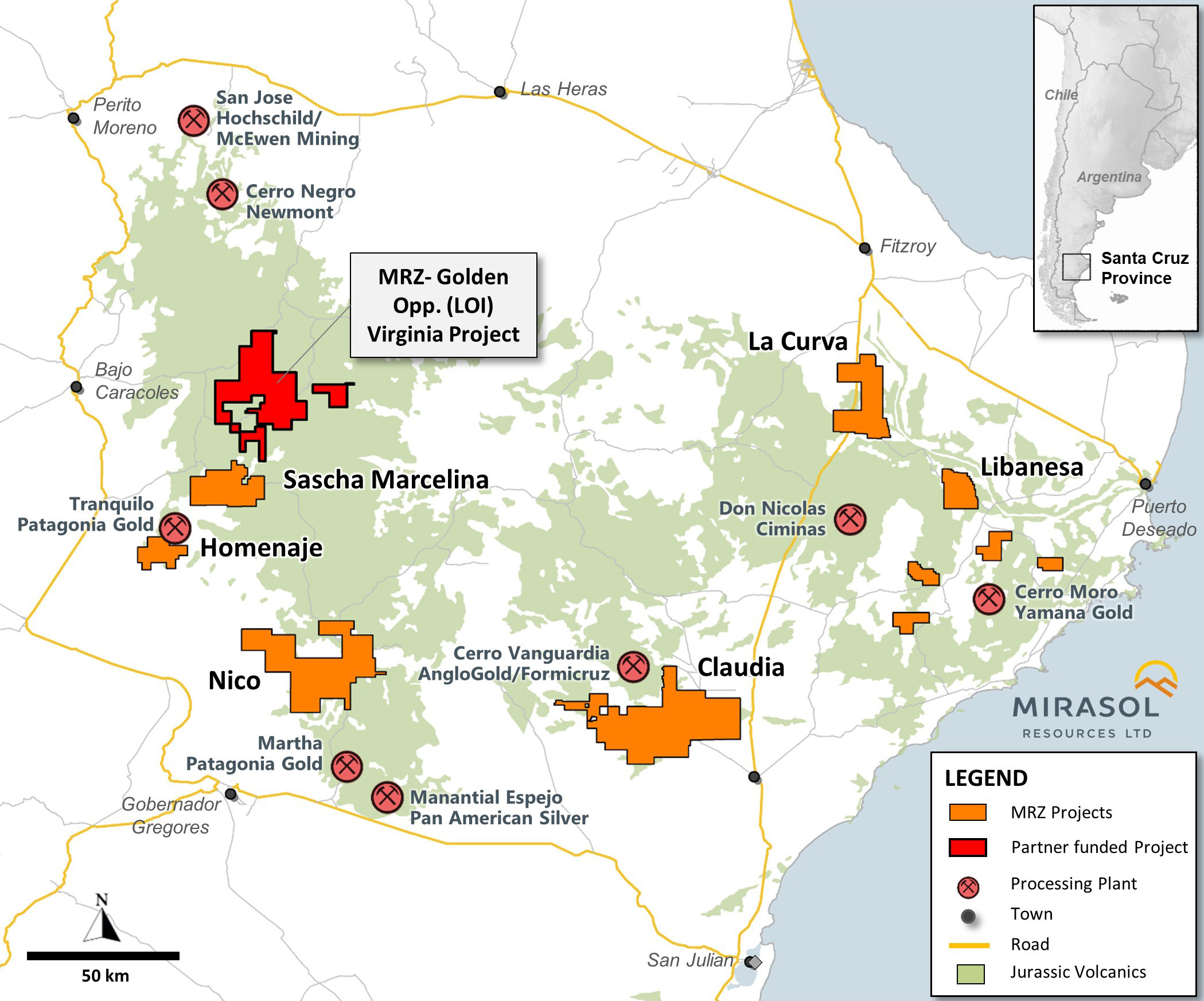 Mirasol first discovered the Project in 2009, following-up a high-priority reconnaissance target identified by its generative team. Over the next few years, Mirasol defined high-grade, intermediate sulfidation epithermal style mineralization in a series of prominent outcrops of vein-breccia that are associated with a rhyolitic volcanic flow dome field. Rock chip and saw cut channel sampling over these outcrops defined significant strike lengths of continuously mineralized vein-breccia, with many samples assaying over 1,000 g/t silver (“Ag”). From 2010 to 2012, Mirasol completed a series of drill programs at the Project, drilling a total of 23,318 m of diamond core in 223 holes, testing the mineralized structures to a maximum depth of 266m. This work was followed by a technical report entitled “Amended Technical Report, Virginia Project, Santa Cruz Province, Argentina – Initial Silver Mineral Resource Estimate” with an effective date of October 24, 2014 and a report date of February 29, 2016, defining seven outcropping bodies of high grade silver mineralization, constrained within conceptual pits, with an indicated mineral resource of 11.9 million ounces of silver at 310 g/t Ag and a further inferred 3.1 million ounces of silver at 207 g/t Ag.

Later that year, Mirasol reported that preliminary prospecting of new claims identified quartz vein and vein-breccia rock float, scattered along a 2 km trend. With a strong belief in the exploration potential of the Virginia district, Mirasol further expanded its property holdings in 2017 with an extra 27,017 hectares of claims to the south of the limit of previous drilling. In May 2018, high grade silver assay results were reported from the additional prospecting of three new target areas, suggesting the potential for an unrecognized, shallow, soil covered, high grade mineralization that would expand the potential of the Project.

Golden Opportunity and Mirasol look forward to testing the exploration upside at the Project at a time of improving precious metal prices.

The Definitive Agreement shall allow the Company to acquire a 100% interest in the Project through (collectively, the “Exercise Price”):

The Shares are issuable as follows:

The Exploration Expenditures are payable as follows:

Following payment of the Exercise Price in full, Mirasol shall transfer 100% of the mineral concessions which comprise the Project to Golden Opportunity (excluding surface rights), subject to a 3% net smelter returns royalty payable on all minerals mined from the Project (the “NSR”) which shall be retained by Mirasol.

Golden Opportunity shall have the option to buy back a 1% NSR for payment of the sum of US$2,000,000 to Mirasol (the “1% NSR Buyback”). Following exercise of the 1% NSR Buyback, Mirasol shall continue to hold an unencumbered (no buyback, right of first offer or right of first refusal) 2% NSR royalty payable on all minerals mined from the Project.

The closing of the Option is subject to, among other things, Golden Opportunity and Mirasol negotiating and executing the Definitive Agreement, exchange approval and Golden Opportunity completing an equity financing of not less than US$1 million within 90 days.

Each Unit will consist of one Share and one half of one common share purchase warrant (each whole warrant, a “Warrant”). Each Warrant entitles the holder to acquire one Share at a price of C$0.25 per share for a period of 24 months following the date of issuance. The Warrants are subject to an acceleration right that allows the Company to give notice of an earlier expiry date if the Company’s share price on the CSE (or such other stock exchange the Shares may be trading on) is equal to or greater than C$0.50 for a period of 10 consecutive trading days.

Golden Opportunity is engaged in the business of mineral exploration and the acquisition of mineral property assets in mining friendly jurisdictions. Its objective is to locate and develop economic precious and base metal properties of merit.

The technical content of this news release has been reviewed and approved by R. Tim Henneberry, P.Geo. (BC) a Qualified Person under NI 43-101 and a Director of Golden Opportunity.

The Canadian Securities Exchange has not approved nor disapproved the contents of this news release.

This news release includes certain forward-looking statements and forward-looking information (collectively, “forward-looking statements”) within the meaning of applicable Canadian securities legislation. All statements, other than statements of historical fact, included herein including, without limitation, statements regarding the negotiation and execution of the Definitive Agreement, the timing and payment the Exercise Price, future capital expenditures, anticipated content, commencement, and cost of exploration programs in respect of the Project, anticipated exploration program results from exploration activities, resources and/or reserves on the Project, the terms and conditions of the Private Placement and the anticipated business plans and timing of future activities of the Company, are forward-looking statements. Although the Company believes that such statements are reasonable, it can give no assurance that such expectations will prove to be correct. Often, but not always, forward looking information can be identified by words such as “pro forma”, “plans”, “expects”, “will”, “may”, “should”, “budget”, “scheduled”, “estimates”, “forecasts”, “intends”, “anticipates”, “believes”, “potential” or variations of such words including negative variations thereof, and phrases that refer to certain actions, events or results that may, could, would, might or will occur or be taken or achieved. Forward-looking statements involve known and unknown risks, uncertainties and other factors which may cause the actual results, performance or achievements of the Company to differ materially from any future results, performance or achievements expressed or implied by the forward-looking statements. Such risks and other factors include, among others, statements as to the anticipated business plans and timing of future activities of the Company, including the Company’s option to acquire the Project, the proposed expenditures for exploration work thereon, the ability of the Company to obtain sufficient financing to fund its business activities and plans, delays in obtaining governmental and regulatory approvals (including of the CSE), permits or financing, changes in laws, regulations and policies affecting mining operations, the Company’s limited operating history, currency fluctuations, title disputes or claims, environmental issues and liabilities, as well as those factors discussed under the heading “Risk Factors” in the Company’s prospectus dated August 30, 2019 and other filings of the Company with the Canadian Securities Authorities, copies of which can be found under the Company’s profile on the SEDAR website at www.sedar.com.